Book Signing for DON’T LOOK BACK

This Saturday I’ll be at Barnes & Noble Kahala signing copies of DON’T LOOK BACK: Hawaiian Myths Made New along with four contributors. I’d love it if you could stop by and say hello (maybe even have a book signed!) and support us and one of the island’s remaining book stores. Hope to see you there!
Who:  Hawai‘i writers Christine Thomas, J. Freen, Victoria Kneubuhl, Marion Lyman-Mersereau and J. Arthur Rath III

What:  The authors will appear at a book signing for the new anthology Don’t Look Back: Hawaiian Myths Made New, edited by Christine Thomas, featuring their work and that of 12 other Hawai‘i writers. 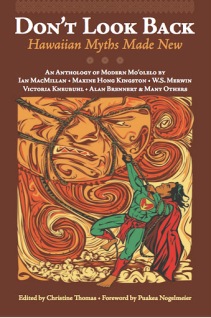 In Don’t Look Back: Hawaiian Myths Made New, just released by Watermark Publishing, editor Christine Thomas has collected 17 tales of old Hawai‘i—lovingly re-imagined and retold for the 21st century. Old meets new in this one-of-a-kind anthology, as Hawai‘i’s best writers—Maxine Hong Kingston, W.S. Merwin, Victoria Kneubuhl, Alan Brennert, the late Ian MacMillan and a dozen others including Thomas herself—present favorite myths and legends in surprising contemporary settings. Here, the reader finds Pele in therapy, Maui as a superhero, the cannibal king O‘ahu Nui in a world of shady deals and political corruption, the star-crossed naupaka lovers as Honolulu high-school sweethearts and other updated versions of Island legends.
Eat the lotus @ literarylotus.com

Categories: Don't Look Back, Hawaii Authors, Hawaiiana, My Events, Myth
No comments yet…