Posts from the “Hawaiiana” Category

On a recent sojourn to Hawai‘i Island, on a whim I took the long drive to the cool, mauka town of Waimea, past green pasture and ranch style houses with a pinching cold belaying blue skies. Dominated by a 1910 residence, the historic home of Anna Lindsey Perry-Fiske, Hawai‘i’s “First Lady of Ranching,” immediately intrigued me. When I finally made time for a tour, I learned it was imbued with more depth than I’d ever guessed driving past it on the main road.

The 110-acre property is one of the state’s earliest ranches. It came into Anna’s family in 1848 and remains home to 50 head of cattle. The expansive grounds, which include a grassy volcanic pu‘u, are so picturesque. White cows remaining from Anna’s herd dotted the apple-green pasture under a crisp sky. Delicate white flowers quietly bloomed in manicured gardens. A yellow cat curled around a post near the entrance. And then there were Anna’s white ranch house and outbuildings, frozen in time to reflect the eras of both Anna, who died in 1995 at age 95, and her parents.

“Anna wanted everything white,” said Kay Kammerzell, the dynamic former ranch director, after I nabbed a seat inside with a small group at Anna’s gleaming koa table, hewn from one complete wood slab. “She had a white house, white cats, and white cattle.” Her ornate rodeo suits by Nudie Cohn, who made Elvis’ gold lamé suit, screamed that this lady was the real deal. But as the one-hour tour unfolded, Anna’s eccentricities didn’t stand out as much as her unrelenting self-confidence and vigor.

A fifth-generation rancher, Anna learned the arts of riding, roping, and tending cattle from a young age, all while being raised as a proper lady of the time. Her accomplishments as a horsewoman, jockey, and cowgirl are undeniable, but her 56-year tenure as manager of her father’s ranch, thriving in a male-dominated business and lifestyle, impressed me even more.

One of Anna’s holoku gowns.

“Anna was an innovative cross-breeder,” Kammerzell told us while detailing Anna’s era of management and referring to the white French breed of cows visible in the pasture. “She was the first rancher to bring Charolais cattle to Hawai‘i.” Anna was also one of the first women in Hawai‘i to earn her butcher’s license. She raced horses against men, and was an award-winning pā‘ū rider.

Each room in the house, from Anna’s childhood bedroom to her adult office, is as it was at the time of Anna’s death, with belongings that further reveal her individuality and story. I wanted to linger and gaze at prized koa furniture, including an 1800s cleft bench; her lilting Regina music box; turquoise Holoku ball gown; and even a lava rock balancing ball found on property of the sort used to train Hawaiian warriors. But I was especially mesmerized by the saddle room, heaving with old tack and saddles—11 of them vintage—ready to tell the story of countless rides, and the saddle-making workshop, next to the blacksmith shop in the historic barn, where I learned about the ka noho li‘o, the Hawaiian tree saddle. 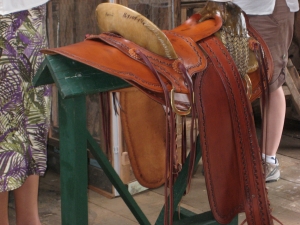 “We want to revive this dying art,” said Kammerzell about crafting this now-rare saddle, originating from the early 1900s and made from wood covered with rawhide. It’s just one way she and the Anna Ranch staff are diligently realizing Anna’s dream of transforming her home into a center for reviving ranching arts and educating younger generations. I knew then that I’d return here with my nieces, who could learn from her remarkable example.

More than anything, what stood out as I left is how they’ve ensured Anna lives on in every corner, which means she won’t be forgotten by me or anyone else who takes the time to experience her life and legacy.

Just to the east on Highway 19, the equally picturesque Jacaranda Inn offers another window into ranching history with rooms in former Parker Ranch bunkhouses and a three-bedroom streamside ranch manager’s cottage built in 1897. (808) 557-5068; jacarandainn.com. Forty minutes away, a peaceful hideaway awaits at Hawaii Island Retreat, just outside Häwï. Indulge in their spa, private yoga and meditation studio, and hiking trails on 50 private coastal acres. (808) 889-6336; hawaiiislandretreat.com.

In 2006, I joined a smattering of children to learn ‘ukulele at a Kailua community center. My husband, seeing how much I enjoyed playing, upgraded me for my birthday three years later. My new ‘ukulele’s gleaming blond koa wood was beautiful, and once I plucked her strings, I felt as if this sonorous instrument had been made just for me. I later learned that not only had my fancy Kamaka ‘ukulele been crafted in the city where I live, but the factory welcomed visitors. I knew I had to go. 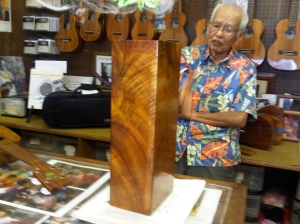 Kamaka Hawai‘i is inconspicuously situated near an empty Kaka‘ako lot in Honolulu’s waning industrial center. What many—including ‘uke virtuoso Jake Shimabukuro—consider to be the world’s best ‘ukulele are made in an unassuming two-story cinder-block building, surprising yet fitting for a hardworking family operation where instruments are the show. Kamaka ‘ukulele remain in such demand there’s currently a one-month wait for stock orders. Prices range from $695 to $1,295. Custom jobs cost more and require at least a four-month wait, but custom orders are not currently being taken.

The 95-year-old company’s iconic ‘ukulele model, nestled in the crowded reception area where the tour begins, is the painted pineapple-shaped ‘uke. Sam Kamaka Sr. created it in 1926 to achieve a bigger sound more comparable to that of a guitar. “Every ‘ukulele made in the world today follows the sound of the pineapple ‘ukulele,” explained his 86-year-old son and factory guide, Fred Kamaka Sr. “And the sound of the ‘ukulele that you know if you’re an ‘ukulele player was born right here. That dog with fleas.”

I know that dog well, as do so many others who enjoy kani ka pila, but it was an unexpected treat to hear about it from Fred Sr., one of the double Ks inlaid on ‘ukulele necks since he and his brother—the other K, Sam Kamaka Jr.—took over the company in 1954 after their father’s death. Today, three of their sons man the helm.

There was plenty more to learn, from how that sought-after Kamaka sound was created—and during Fred Sr.’s plucking demonstration, how the family has made it even cleaner today—to the shapes and sounds of their nine different models, all made from expensive Hawai‘i Island koa wood. The instruments were stunning, but as I listened to Fred Sr., I was most struck by the Kamakas’ living tradition, ingrained work ethic, and longevity in a changing world. “My brother and I were impressed into the business. ‘You will . . . you must!’” said Fred Sr. with a touch of humor. “It was a way of life.”

Once inside the factory, a cramped space full of whirring machinery, I ignored the heat and noise and stuck close to the charismatic Fred Sr. to better understand how my ‘ukulele was made. It seemed at once complicated and simple—koa planks become separate parts and then a whole instrument, in a coordinated dance of soaking, bending, cutting, and sanding. In this ever-evolving process, old techniques are honed alongside new machines and strategies to reach the annual 4,000-‘ukulele goal. 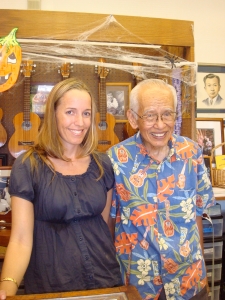 The author with Fred Kamaka Sr.

Rows of clear-lacquered, nearly complete ‘ukulele lined the shelves in the quieter upstairs finishing room. “Nothing is sold, nothing is shipped, without being checked by one or two Kamakas,” said Fred Sr., and that included mine. Before bidding us farewell, he showed us a figured koa Jake Shimabukuro model. They’ve made all of the ‘ukulele savant’s instruments because, as Fred Sr. explained, “Jake says, ‘Kamaka set the standard.’”

If I didn’t already own one, I might have ordered an ‘ukulele on the spot. Instead, I drove straight home, where I retrieved my ‘ukulele from its case. The rest of the day’s work could wait, I decided. This beauty demanded to be played.

Book Signing for DON’T LOOK BACK

This Saturday I’ll be at Barnes & Noble Kahala signing copies of DON’T LOOK BACK: Hawaiian Myths Made New along with four contributors. I’d love it if you could stop by and say hello (maybe even have a book signed!) and support us and one of the island’s remaining book stores. Hope to see you there!
Who:  Hawai‘i writers Christine Thomas, J. Freen, Victoria Kneubuhl, Marion Lyman-Mersereau and J. Arthur Rath III

What:  The authors will appear at a book signing for the new anthology Don’t Look Back: Hawaiian Myths Made New, edited by Christine Thomas, featuring their work and that of 12 other Hawai‘i writers.

In Don’t Look Back: Hawaiian Myths Made New, just released by Watermark Publishing, editor Christine Thomas has collected 17 tales of old Hawai‘i—lovingly re-imagined and retold for the 21st century. Old meets new in this one-of-a-kind anthology, as Hawai‘i’s best writers—Maxine Hong Kingston, W.S. Merwin, Victoria Kneubuhl, Alan Brennert, the late Ian MacMillan and a dozen others including Thomas herself—present favorite myths and legends in surprising contemporary settings. Here, the reader finds Pele in therapy, Maui as a superhero, the cannibal king O‘ahu Nui in a world of shady deals and political corruption, the star-crossed naupaka lovers as Honolulu high-school sweethearts and other updated versions of Island legends.
Eat the lotus @ literarylotus.com

Hawaiian Surfing: Traditions from the Past

This comprehensive ode to Hawaiian surfing is an impressive reference covering everything from board to river surfing, and detailing traditional surf sites across the islands, including Kaho‘olawe and Ni‘ihau. Clark weaves in excerpts of Hawaiian-language newspapers, myth—especially of surfing goddess Hi‘iakaikapoliopele—early texts by the likes of Malo and Beckwith, and even an account of surfing-related Hawaiian place names in Waikiki.

Perhaps most remarkable is the 250-plus page Hawaiian-English dictionary of surfing terms, with nearly all entries followed by passages illustrating how terms were used in context. Clark works closely with Awaiaulu, dedicated to fostering Hawaiian knowledge today.

–Christine Thomas for the Honolulu Star-Advertiser, On My Shelf
Eat the lotus @ literarylotus.com

What do Hawaiians really think about life in the Islands?

When the curtain goes up at the Kumu Kahua Theatre, O‘ahu’s modern city will seem to disappear. As the play, this time Kamau, unfolds from a center stage covered in simple, woven lauhala mats, you’ll form a new island vision.

Since 1971, all of the original productions at this intimate 100-seat theater near Honolulu’s historical Chinatown district have been performed in a relatable Hawaiian voice (often using Hawaiian or pidgin dialogue) with minimal costuming, to portray current local issues and concerns.

This special engagement tells the story of Alika, a tour-bus driver whose family’s oceanfront land is being purchased by a developer for a hotel. As the state’s only theater company presenting plays about Hawaii by Hawaiian playwrights, it’s your best chance to experience powerful revelations of what Hawaiians really think about life here — an impact that won’t disappear when the curtain falls. kumukahua.org