An actor teaming up with a restaurateur is a common, almost cliche scenario these days, but when LOST star Daniel Dae Kim first connected with Hawai’i chef D.K. Kodama, it wasn’t in the kitchen but at their children’s school.

After cementing a friendship there and on the golf course, together with two other investors Daniel and D.K. opened Hawai’i’s first The Counter burger franchise in Kahala on Feburary 16, 2009–a way for Daniel to put down roots in the community he now calls home, and for both fathers to create a family-friendly place to grab a good meal or pau hana drink.

Sitting in The Counter’s modern-industrial, light-filled dining room just before opening, Daniel and D.K. sat down to talk food, kim chee, and the future, while I moderated and occasionally fed them a few questions of my own.

A very short excerpt of the interview appeared in the most recent Modern Luxury Hawai’i magazine, but I thought the entire, often funny, interview should also see the light of day here.

Daniel: What do you like to eat when you just want comfort food?

DK: You know the thing about me is that I never have one single favorite—I have a lot of favorites. That’s why I like living in Hawai`i—the variety. If you want Chinese, Korean, Japanese, American—whatever kind of food you’re into, that’s what you can eat. It’s the same thing with drinking—I don’t have one favorite drink. If it’s hot I’ll drink one thing, if it’s cold another.

DANIEL: Do your restaurants reflect your taste in food?

DK: They do, actually. Sansei does because we don’t just have Japanese food, we have things that I like, and everything has to be a Wow flavor. Everything. The reason I got in the restaurant business is the instant gratification: you serve people food, they take a bite, they smile and say: Wow! This is great. It’s one of the few pleasures we can show in public.

DANIEL: Where does The Counter fit in?

DK: The reason I love The Counter is the quality, and also the value. We’ve talked about this before—our families can come here and have a great time, make all the noise they want, eat messily, and it’s comfort food for them, especially in these times and this economy.

DANIEL: How did you modify this Counter location to make it more appropriate for the community here?

DK: We put on a loco moco, and added rice to the menu—of course we had to get corporate approval, but rice is a staple here in Hawai’i so we had to do that, and loco moco is a natural. Hawai’i’s master sommelier, Chuck Furuya, looked at the wine list and recommended at least 6 to 8 wines, and when Chuck picks wine it has good quality and good value. And of course, not because of you Daniel, but kim chee is another staple here in Hawai’i, so that’s another natural addition. Or maybe it is because of you? 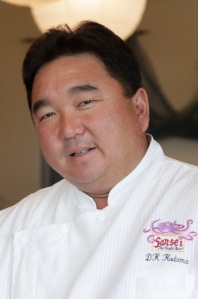 DANIEL: No, I hate kim chee. No, that’s not true! Actually you know what’s really great with kim chee is spaghetti. Have you ever had pasta with marinara sauce and kim chee? It’s one of my favorite things.

DK: We’ve got some in the fridge. I’ve gotta get it.

DANIEL: Your mother has influenced a lot of your restaurants in the past. Is she a guiding force in your life?

DK: No question. That’s why I like variety. Sitting at that dinner table with my four brothers and my sister, you know she wouldn’t always cook Japanese every meal. She loved to experiment. That’s why my palate says, Hey, if it’s good, eat it.

DANIEL: When The Counter has its one-year anniversary, how are we going to celebrate?

DK: You know, I think we should buy a couple of Harleys.

DANIEL: We’ll have to see what my wife says about that.