Lawyers make great storytellers. Chicago criminal defense attorney, onetime Stanford writing teacher and bestselling author Scott Turow has a good explanation why: “Every trial lawyer lives by the motto that if you want to teach a jury something you tell them a story,” he says. 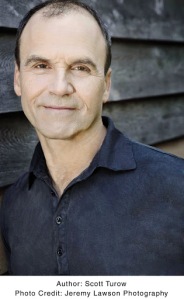 It’s no wonder he has soared in parallel careers since publishing One L, about his first year in Harvard Law School, in 1977, and his breakout novel, Presumed Innocent, which marked him as a genre-busting, literary legal thriller writer, in 1987. Eight other books and more than twenty years later, Turow has come back to the beginning. His new novel Innocent—the first full-length one in five years—resurrects Presumed Innocent’s Judge Rusty Sabich, now a bit older and once again at odds with adversary Tommy Molto after the enigmatic death of Sabich’s wife.

A return to the Presumed Innocent landscape gave Turow the opportunity to revisit what he admits is an alter ego of sorts. “I wanted to be with Rusty again, I really did—this flawed sensitive smart guy who I really seemed to understand,” he says. “He’s different from me in lots of ways. He’s a judge and I’m not; he grew up in a working class family and I didn’t; and he was a creature of the state criminal justice system while I came out of the federal system. He’s a quiet and more aloof guy that I am. But I share many of his failings and some of his strengths.”

Even though Innocent can function as a sequel, Turow was conscious not to imitate its predecessor. He sets it apart from the opening with a first-person narration, not by Sabich, but by his son—one that also offers a chilling glimpse of the novel’s thematic exploration of change, love and loyalty—then rotates through multiple viewpoints of Sabich, Molto and an important female character. But because Turow writes his way through stories rather than thinking them out beforehand, he wasn’t always sure how Innocent would be structured. “You put your heart and your hands out in front of you and see what happens,” he explains.

Like his other books, Innocent started out with an isolated event, this time written on a Post-it note. “At some point I had jotted just a little idea for a scene—a man is sitting on a bed in which the dead body of a woman lies,” he says.

Then, while writing the serialized novella Limitations for The New York Times, he felt called back to Sabich. “I turned around and saw the note on my desk and realized Rusty Sabich was the man sitting on the bed. Then I was really off to the races.”

Turow writes at home in the mornings and on the train while heading to work, where he often devotes time to pro bono cases he takes on as a matter of principle and values—a way to share some of his good fortune with the underrepresented and disadvantaged. “I’m lucky that I’ve had a pretty long highlight reel, certainly as a lawyer,” says Turow, citing a complex capital punishment case as one of his most remarkable. (Known as the Alex Hernandez case, it was described in Ultimate Punishment.) “And obviously as a novelist I’ve had a good role of the dice.”

Though he has scaled back his legal duties to make room for his now primary role as a writer, he still feels engaged when practicing law. “It enables you to do a lot of different things,” says the sharp and erudite Turow, who doesn’t seem to stay still for long. “Whatever happens, by the time Innocent comes out I intend to be enmeshed in something else. That’s the best antidote to the ups and downs of publication.”

Whether that’s the comic thriller idea he’s been pushing around or that play he’s always wanted to write, it’s certain his next creative endeavor will be surprising.

Categories: fiction, Interviews
No comments yet…