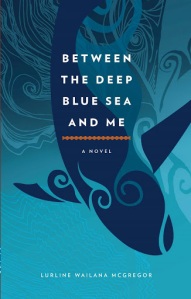 Between the Deep Blue Sea and Me
By Lurline Wailana McGregor
Kamehameha; 153 pages; $15

Stories don’t lend themselves to every medium, and by basing “Between the Deep Blue Sea and Me” on an original screenplay, Lurline McGregor creates a considerable challenge—making something designed to be seen work as a readable novel. The resulting narrative is filmic and loaded with dialogue, though isn’t always effective.

McGregor often tells readers what her characters feel and want rather than dramatizing scenes, and though the stage is set for Moana Kawelo, an ambitious Hawaiian museum curator in Los Angeles estranged from her family and culture, and her father, who consciously chose a Western path over a Hawaiian one, there’s no major character development or plot depth.

Moments when McGregor lets go are vivid and evocative, particularly passages that flash back to past events and memories, or that incorporate real-time illustrations of culture such as ‘aumakua guardians, revealing the essential value of Moana’s struggle to reconnect to Hawaiian culture.

If readers can wade through awkward prose such as characters continually “thinking to themselves,” the story will resonate as portraying a vital dilemma that every Hawaiian faces. Otherwise, the story may shine much more brightly as first devised—on the screen.